Nebraska attorney Chris Miller dedicates his practice to representing those who have fallen victim to the wrongful acts of others. Whether you have been injured by a dangerous product or your property or business has been damaged due to the fault of others, Mr. Miller’s past experience in complex litigation allows him to analyze your case from every angle. Mr. Miller strives to provide prospective clients with a superior, yet frank analysis of their issues. Understanding all of your options, both legal and nonlegal, is critical when deciding whether you need a lawyer.

After graduating from the University of Nebraska College of Law in 2002, Mr. Miller began his legal career at the large defense firm of Shook, Hardy & Bacon in Kansas City, Missouri, representing product manufacturers. After two years, his focus took a dramatic u-turn when he left the defense firm and began representing victims of dangerous products, fraud, and neglect. For the next seven years Mr. Miller practiced at the nationally recognized litigation firm of Humphrey, Farrington & McClain in Independence, Missouri, where he worked extensively on the firm’s nationwide products liability team. There, he represented a wide range of clients, including defrauded consumers, workers sickened by toxic chemicals, and people injured by the negligence of others.

His first jury trial at the age of 30 resulted in a $1.2 million verdict for an elderly slip-and-fall victim. Other individual accomplishments include:

In 2015, he was awarded Great Plains Super Lawyer status, an honor reserved for those lawyers who exhibit excellence in practice.  Mr. Miller also has a BV Peer Review Rating for Martindale-Hubbell law directory.

Mr. Miller grew up in Ravenna, Nebraska. After nine years of being away from “home” he returned to Nebraska in 2011 to raise his family and continue his legal career. Chris and his wife Megan enjoy raising their children Harry and Eloise, chasing the family dog, and spending time with family and friends.

What you need to know about Chris Miller, as written by Mark Grell

Chris never stops thinking about his clients. He is always brainstorming new ways to try to help them. He fleshes out every possible argument that can be made, and comes up with ideas that other attorneys simply don’t ever consider. It sounds clichéd, but once you become a client of Chris’, he doesn’t stop fighting for you. He is aggressive and very defensive of his clients’ well-being, especially if an insurance adjuster or an opposing attorney isn’t acting respectfully towards a client. Finally, Chris takes the time to make sure his clients understand what’s going on in every step of the litigation process. 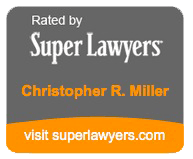 “Chris seemed to be a step ahead of the other attorneys. I highly recommend Chris Miller. He’s good at what he does.”